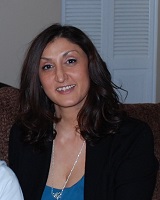 Bahareh Brittany Alaei earned her B.A from the University of California, Berkeley, and her M.A. from California State University, Long Beach. Her research interest include digital rhetoric, multimodal composition, and 20th Century diasporic literature. In playing with the conventions of composition and digital media, she hopes to help blur the boundaries between multimodal writing and filmmaking. She has been published in Kairos, Itineration, and Present Tense. When she’s not working, she enjoys trying out new restaurants and sour beer, listening to podcasts, and playing with her family and friends.

“One More Video Theory (Some Assemblage Required)”  (with Sarah Arroyo). Present Tense: A Journal of Rhetoric in Society 5.2 December 2015.

Chair for "Participation, Collaboration, and Student Discourse" Conference on College Composition and Communication. Portland, OR, March 2017.

“Videocy in the Age of Open Access: The Challenges to Scholarship.” Conference on College Composition and Communication. Indianapolis, IN. March 2014.

“What’s Funny? Looking Forward while Fighting Back with Post-Conflict Laughter.” Chapter accepted for publication in the collection Rhetorical Speculations.​